The Western Digital Caviar Green 3TB is an energy-efficient 3TB hard disk, designed to save power using Western Digital's Intellipower technology, which uses a variety of caching algorithms to get the best possible performance from the disk's 5,400rpm spin speed.

It's only to be expected that a low-power disk won't perform quite as well as its more power-hungry equivalents, but the Caviar Green did rather well, all things considered. Its performance in our large file transfer tests was particularly good, with an average of 139.2MB/s based on a 132.1MB/s write speed and 146.3MB/s read speed. 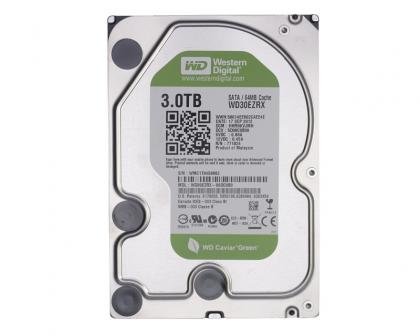 It was in our small file test that the slow spin speed had a detrimental impact, dropping average throughput to 47.5MB/s, with a 38.4MB/s write and 56.6MB/s read speed. These aren't bad for a low-power disk, but make it better suited as a data disk than your main system disk.

The real saving grace is the low price, at just over 3p per gigabyte. The Western Digital Caviar Green 3TB has a two year RTB warranty, which isn't particularly generous. We can forgive this for the price, and this hard disk is a great Budget Buy.